When application updates become available it takes the average user a while to apply or install those updates. This simply happens because not every user is constantly checking if all the applications they run have an update available.

OpenAppStack wants to take this responsibility away from the user by automatically testing updates as soon as they become available and subsequently making sure all clusters running OpenAppStack update themselves to the newest version.

Many software products exist already that could help OpenAppStack achieve that goal. This post compares those auto update mechanisms and explains our choice in the matter.

Although we also want to provide automatic updating of the rest of the cluster (Kubernetes, maybe even the base operating system) in the future, this post focuses solely on updating applications running within Kubernetes.

We searched for the possible tools that fit our requirements (more about that in a minute). This article is primarily based on information from the project’s README, website, documentation and people’s opinions in GitHub issues and on Reddit (thank you /r/kubernetes).

We have written a list of requirements that we think are important for OpenAppStack.

Next we have some soft requirements. Preferably we find something that ticks all these boxes.

This section lists the tools we found with a non-extensive internet search. As said before, we only list the tools that are open source and work with Kubernetes. Each tool listing starts with a quote from their readme file on GitHub.

In contrast to most alternatives following next, Environment Operator exposes an API in your cluster which you can call to update applications. It also exposes a metrics API.

The most logical case is to call Environment Operator API endpoints from a CI script, instead of automatically from within the cluster, which is why we did not tick the “automatically upgrade X” boxes for this mechanism. However, you could create Jobs to regularly run upgrades.

Flux is a tool that automatically ensures that the state of a cluster matches the config in git. It uses an operator in the cluster to trigger deployments inside Kubernetes, which means you don’t need a separate CD tool. It monitors all relevant image repositories, detects new images, triggers deployments and updates the desired running configuration based on that (and a configurable policy).

Flux developers coined the term GitOps to define what Flux does: all changes to a cluster need to be applied to a git repository. Afterwards, Flux pulls these changes and automatically applies them to the cluster.

Flux runs in the cluster and can be installed with Helm. It includes an optional Helm Operator, which enables flux to update applications installed with helm when new versions of the chart become available.

imago looks for Kubernetes Deployments and DaemonSets configuration and update them to use the latest image sha256 digest from the docker repository.

Imago automatically updates the docker containers in DaemonSets and Deployments to the latest container version. The rest of the cluster state remains untouched by the program, so if you would want to install a new helm chart, you would have to do that yourself.

If you provide Imago with a Kubernetes config, it can run outside a cluster (for example in a CI pipeline). It is also possible to run it as a Job within a cluster.

Keel is a tool for automating Kubernetes deployment updates. Keel is stateless, robust and lightweight.

Keel can manage the versions of containers running in Deployments, StatefulSets and DaemonSets. You can achieve this by placing annotations in Kubernetes manifests. Keel runs in the cluster and regularly polls docker registries to check for new versions. At first glance Keel looks very well documented. The documentation includes many usage examples.

Keel does not do automatic updates of Kubernetes components or Helm charts based on an external repo. There is an open issue about it, but it seems like the developers made a choice not to go down that road in the future.

Keel exposes a pretty nice looking web UI, but does not include a Prometheus endpoint.

kube-applier is a service that enables continuous deployment of Kubernetes objects by applying declarative configuration files from a Git repository to a Kubernetes cluster. 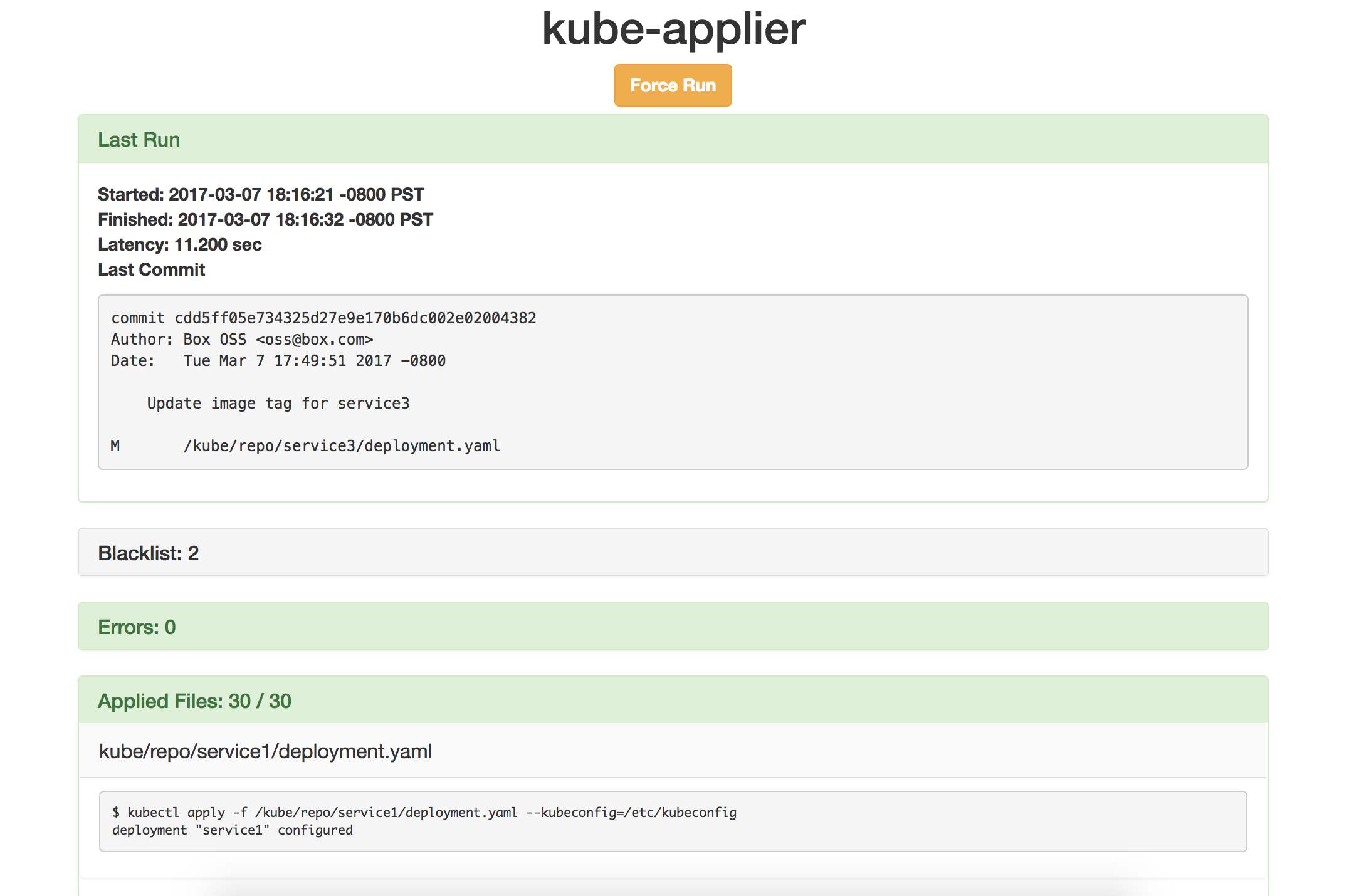 Kube-applier seems to take a rather simple approach to pull-based updating. Like they say in their readme:

At a specified interval, kube-applier performs a “full run”, issuing kubectl apply commands for all JSON and YAML files within the repo.

Furthermore, it contains a “Status UI” that shows how the run went. It doesn’t do much more than this, but simply running kubectl apply can be very powerful by itself already. Lastly it exposes a Prometheus endpoint which shares how many files were applied and how long each apply command took.

We compare all the features of the contenders in a table.

As you can see in the table, most of our requirements are fulfilled by Flux. Our next step is to install Flux and see if we like how it works. Alternatively, it seems like kube-applier’s simple but powerful approach could help us achieve our goals as well.

We will keep you updated on our experiences with Flux!